Herstoryan
We all have a story to tell. Some speak louder than others. Listen closely to hear the stories of our ancestors echoing under our footsteps. They are the authors. We are the keepers.

I recently found the location of my great great grandparents' 1879 residence in Dayton, Ohio. The home was listed at the "corner of Brown and Hess" in the obituary found in the Dayton Journal newspaper for their son, Charles Raymond Judson. You can read about it here: Remember Microfilm? Obituary of Charles Judson, age 3 (1879)


Google Maps shows a building still standing at the corner of Brown and Hess; could that be the Judson home still standing? Time to investigate:

View Larger Map
Question: What kind of neighborhood is it today? Are these new or historical buildings?
Gameplan: Look for obvious clues

=====>Result: The home is located in the Oregon Historic District and they have a website with newsletters, photos, and history of the district!


=====>Result: Wonderful conversation with the owner of the INN PORT BED and BREAKFAST right down the street from the property. She was extremely friendly and offered as much information as she could about the building and the district. The building at the NE corner of Brown and Hess houses apartments - address 128-130 Brown Street. There used to be a school at the SE corner of Brown and Hess (where the park is now).

=====>Result: The building matches the architecture of the other buildings on the street. It is definitely not recent construction. It might be too large to have been a single family residence in 1879.

Question: Is this the same building that was standing there in 1879?
Gameplan: Identify available resources


=====>Result: YES! The amazing geneablogger and twitter friend Lori, author of Genealogy and Me commented on a post of mine a few weeks back inquiring about the location of my great great grandparents' home in Dayton since that was her hometown. Perfect! Little Miss Wonderful soon emailed me photos of the property and data that she had researched on the county tax office website. She also showed me where to find photos of the neighborhood buildings on the Oregon Historic District website which I had previously missed. She also mentioned that there was a Great Flood of 1913 in Dayton which later turned out to be a great clue! 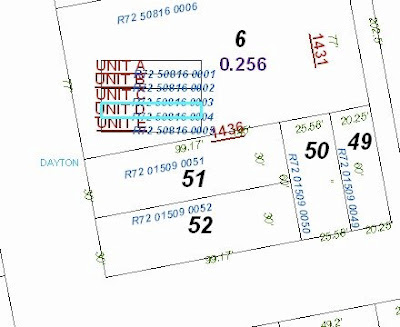 
=====>Result: If the Judson house was located at the NE corner of Brown and Hess in 1879 it was not located in the building that currently stands there which was built in 1920. They would have lived on the lot identified by Parcel ID R72 01509 0052. After the Great Flood of 1913 in Dayton, several buildings were razed and new structures took their place.


Question: The 1880 Federal Census lists the Judsons living on 4th street. Did they move after the deaths of their children or could the funeral have been held in the home of a relative? Who lived at the corner of Brown and Hess in 1880? 1879?


Gameplan: Identify primary resources from that time period that can provide an address.

So where are Lewis and Helen? They are listed as boarding at the Phillips house [on 4th Street].

Just to cover all the bases, the SE Corner of Brown and Hess housed an Intermediate school in 1880 The Dayton Metro Library website states that the Newcom school was "built in 1838" so the Judson residence had to be located on the NE corner.

Summary: Lewis and Helen Judson resided at the corner of Brown and Hess in Dayton, Ohio Dec 1879 according to the Obituary of their son Charles Raymond Judson published in the Dayton Daily Journal Newspaper December 27, 1879 Vol. XVII. NO. 130 Column Six. Sometime within the year 1880 the Judson's relocated to the Phillips boarding house on 4th Street in Dayton. One can only speculate as to what prompted the move: doctors bills and burial costs or just painful memories? The 1880 Dayton City Directory shows a school located at the SE corner of Brown and Hess and a residence (Henry C. Eversole) at the NE corner. The Dayton Library website states that the Newcom school was built in 1838 hence the only possible location of residence for the Judson's was at the Northeast corner. The Montgomery County Ohio Real Estate Tax Information System shows Parcel ID R72 01509 0052 (30' x 99.17') located at the NE corner of Brown and Hess. The building currently standing at the NE corner of Brown and Hess was built in 1920 and is not the same building in which Judsons lived.

Thanks to Scooby Doo Quotes from the Great Sayings blog!